Current oncology practice is “failing those diagnosed with cancer” with regard to prescribing exercise, says a call-to-action report from a global coalition of 40 leaders from 17 organizations, spearheaded by the American College of Sports Medicine (ACSM).

Exercise prescriptions should now be standard of care for all appropriate oncology patients and physical activity “should become a vital sign, similar to blood pressure,” recorded at each patient visit, the authors argue.

“The benefits of exercise is not a new concept. These benefits can be even greater when we are going through or have completed cancer treatment because of the ways that treatment can affect our bodies,” says Matt Schmitz, cancer exercise specialist at the Helen G. Nassif Community Cancer Center. “Exercise can increase, energy, strength, stamina, and range of motion, while decreasing fatigue. It also can help with cardiovascular function, sleep, and side effects of treatment. Not to mention the psychological benefits that we receive from exercise.”

The majority of people living with and beyond cancer are not regularly physically active, the team says.

The authors provide a two-question, assess-advise-refer algorithm, which they say “does not require much time or skill by the oncology clinician.”

The new report was published online October 16 in CA: A Cancer Journal for Clinicians.

There are 44 million cancer survivors worldwide and 18.1 million new diagnoses each year. One third to two thirds of people living with or beyond cancer are completely inactive, according to three large cohort studies of almost 13,000 people in the United States and United Kingdom.

“Exercise through treatment allows patients to enjoy life with the same energy and confidence they had prior to diagnosis,” says Matt Schmitz.

“We are now at a point where we have more evidence in the area of exercise oncology than we had for heart disease [to become standard of care],” said Kathryn Schmitz. “It’s time to speak with one voice; it’s time for a paradigm shift in cancer care.”

Since the last ACSM roundtable in 2010, more than 2500 randomized-controlled exercise trials in cancer have been published. These were accompanied by calls for “exercise as medicine” from the National Comprehensive Cancer Network, the American College of Surgeons, the American Society of Clinical Oncology, Exercise and Sports Science Australia (ESSA), and other organizations.

Notably, however, exercise has never been proven to improve overall survival among cancer patients in a randomized controlled trial. This may change in coming years, as trials in multiple cancers are now underway.

The new recommendations represent the first global call to action on exercise in cancer, involving organizations with a stake in cancer and/or exercise including: the US Centers for Disease Control and Prevention and National Cancer Institute, UK’s Macmillan Cancer Support, the Canadian Society for Exercise Physiology, ESSA, the Royal Dutch Society for Physical Therapy, and the German Union for Health Exercise and Exercise Therapy.

There are two questions in the assess-advise-refer algorithm. The first is: “How many days during the past week have you performed physical activity where your heart beasts faster and your breathing is harder than normal for 30 minutes or more?”

And the second is: “How many days during the past week have you performed physical activity to increase muscle strength, such as lifting weights?”

Clinicians then ask themselves: “Would this patient be safe exercising without medical supervision?”

Finally, if possible, the clinician should refer such patients to the “best available” program.

“Our program is very unique because it is centered around patients and their needs,” says Matt Schmitz. “Not only do we have a variety of group classes for all levels of fitness, but I am also available to develop a personal fitness plan with all of your goals included. Exercise needs change with age, occupation hobbies and interests. A personalized plan is going to be different for a 30 year old woman with kids going through treatment than it would be for a 75 year old man. Both have specific needs and would benefit from exercise but in very different ways.”

The authors further say that their “simple proposal” is for clinicians to refer patients to either home- or community-based exercise or for further evaluation and intervention in outpatient rehabilitation.

Prescribing exercise to cancer patients will require some changes among stakeholders, say the authors. “This will require care coordination with appropriate professionals as well as change in the behaviors of clinicians, patients, and those who deliver the rehabilitation and exercise programming,” they write.

Other implementation challenges include capacity for triage and referral, the need for a program registry, costs and compensation, and workforce development, the expert team states.

Various countries are at a different stages of prescribing exercise. The main challenge faced by the United States, said Kathryn Schmitz, is the fractured nature of cancer care. “[The different] medical records don’t talk to each other. If they could, we could use machine learning to appropriately triage patients and trigger reminders to get people into [exercise] programming,” she said.

Two other papers have come out of this international group. Besides the current call-to-action document, two papers are currently in press with Medicine & Science in Sports & Exercise and outline the current evidence base supporting exercise as medicine in cancer.

Sandra Hayes, PhD, Queensland University of Technology, Brisbane, Australia, who was not involved in the current report, told Medscape Medical News that exercise researchers have struggled to have their findings embraced by the field of oncology.

In 2017, Hayes and her team showed, in an exploratory analysis of combined data from two randomized controlled clinical trials of 8-month exercise programs among cancer patients, a mortality benefit for exercise, she said.

The Australian team showed that, after a median follow-up of 8.3 years, there were 11 (5.3%) deaths in the exercise group compared with 15 (11.5%) deaths in the usual care group (overall survival hazard ratio for the exercise group, 0.45; 95% confidence interval, 0.20 – 0.96; P = .04). The study of 237 Australian women was eventually accepted by Breast Cancer Research and Treatment, but getting publishers interested was tough. “I struggled to get these results published . . . this didn’t tick the boxes,” Hayes said in an interview at the 2017 San Antonio Breast Cancer Symposium.

Hayes emphasized at the time that these results were exploratory and had small numbers; however, she did comment that, “If a drug did this there would be people screaming from the rafters.”

Hayes played a role in the 2019 ESSA guidelines. She believes the perception of the importance of exercise for cancer patients is changing. “Where we still have room for improvement is in making it part of the consult,” she said, “and getting people to move.” She also said payers must step up to provide the specialized workforce to meet the demand.

Kathryn Schmitz agreed that the solution is multi-factorial. “None of us has any interest in making the oncologist the bad guy. They are overwhelmed. It’s not simply that the oncologist needs to talk about this more, you need a better workforce and changes in policy. And even if the oncologist says you should be moving, the public says they shouldn’t. It’s an entire waterfront of change.”

“Our entire team of surgeons, oncologists, radiologists, and care coordinators are a great referral source,” says Matt Schmitz ” They understand its about making this patient as healthy as possible from diagnosis through survivorship.”

Blue-chip exercise programs singled out in the new recommendations included MoveMore, a program from UK cancer charity Macmillan Cancer Support and US cancer support organization LIVESTRONG. MoveMore is now an integral part of the United Kingdom’s cancer care pathway and provides at least 1 year of free exercise intervention to all UK cancer patients. LIVESTRONG, the largest such program in the world, provides small-group programs for up to 12 weeks per patient.

Such programs take years of planning. However, there are two simple things every oncologist could do right now to encourage cancer patients to exercise, said Kathryn Schmitz. “Ask about it. Assess it,” she said. “Because what that tells the patient is that it matters to the physician.” If the oncologist does not mention exercise the patient assumes it’s OK to be sedentary, Kathryn Schmitz said. 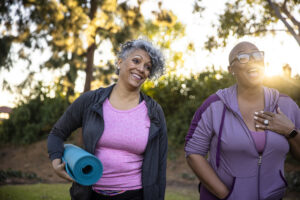 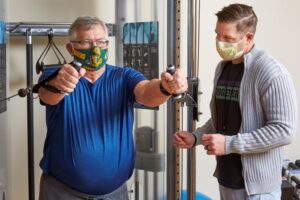 Ask the Expert: Physical and Integrative Wellness at the Community Cancer Center 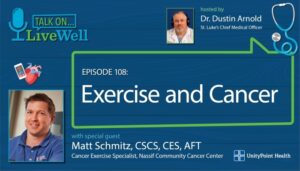