After watching her mother battle breast cancer, Lenchen Raeside knew her family history put her at an increased risk, so she was vigilant about mammograms. That vigilance paid off when Raeside, 55, was diagnosed with breast cancer in 2014 and learned the tumor had been caught at its earliest, most treatable stage.

“They found it early enough I didn’t need chemotherapy or other follow-up treatment,” says Raeside.

Then her oncologist, Rasa L. Buntinas, MD, Physicians’ Clinic of Iowa Hematology & Oncology, suggested Raeside consider genetic testing through the Cancer Risk Assessment and Genetics Clinic at the Community Cancer Center. Raeside agreed because she thought it might give her daughter, a young mother, insight for her own health.

Raeside met with Genetic Nurse Practitioner Shana Coker at the Community Cancer Center. Coker talked to Raeside about her family history and personal risk factors. She also explained the benefits, risks and potential outcomes of genetic testing. “We make sure people understand how results might impact them,” says Coker. “We want them to know what their risk reduction options are if they have positive results.”

Raeside chose to get tested and was surprised to learn she has a CHEK2 gene mutation associated with an increased risk of breast cancer, particularly for women with a family history. The mutation is less common than BRCA1 or BRCA2, the so-called “breast cancer genes.” Raeside says the results supported her decision to get a bilateral mastectomy (removal of both breasts).

Coker cautions genetic testing is not appropriate for everyone. “We do a thorough screening and education so individuals can make an informed decision.”

But for Lenchen Raeside, the knowledge she gained was significant, not only for her daughter but for Raeside’s brothers as well. “My particular mutation may increase the risk for colon cancer,” explains Raeside. “It means I need to get a colonoscopy more frequently and my brothers need to be more vigilant, too. Getting tested has proved very positive for my family.” 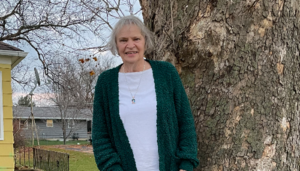 As if running one marathon in the middle of active cancer treatment isn’t impressive enough, Phil Decker, who was diagnosed